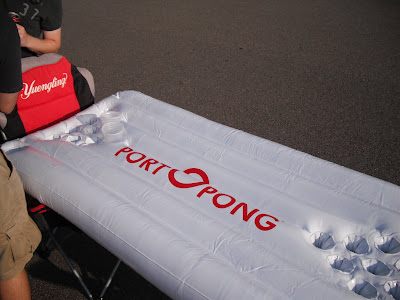 So a few weeks ago my friends at Port-O-Pong send me their product an inflatable beer pong table. It's suppose to be used in the pool and trust me I'm still dying to use it in one. Anything that involves a pool and drinking is awesome by Irish Road standards. But being a city resident in Pittsburgh makes it hard to have easy access to a pool ... at least a pool you can drink in too (Note: If you have a pool and would like to kick it with Irish Road and my awesome new beer toy just contact me). 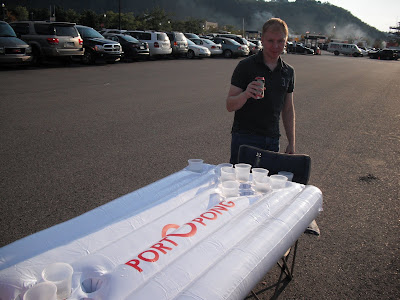 But this little set back won't stop me and my buddies from being the most inventive drinker I can be. So what do we decide to do? What all good Pittsburghers who love beer and sports do ... Tailgate! Fuck ... an inflatable table can easily be propped up on shit and still used for it's intended purpose. You know ... drinking. But this table has some advantages over normal tables that you can bring to a tailgate. 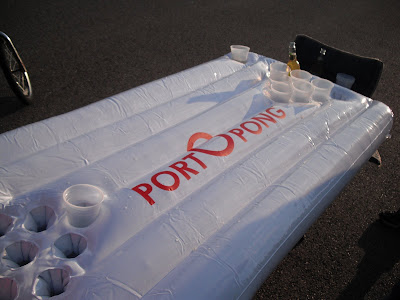 1 - It's inflatable. For those of you who are drunk while reading this, first off I applaud you for being drunk while reading my site, but more importantly it means it's compact. Less space is taken away from your beer coolers, grill and portable chairs. Then when you're finished you just pop the valve and it is deflated and packed up. 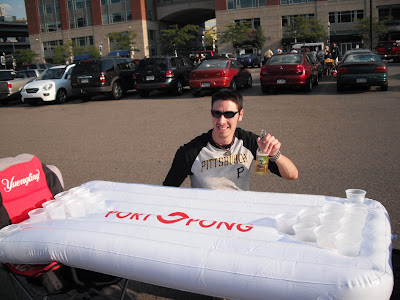 2 - The cups are held in place by the table. This is necessary when playing at a tailgate. There is always wind in the parking lots by the stadiums. On any normal table the cups would blow away and dump your beer. On this table they're stable and actually pushed down into the raft/table. Bonus! Use your table for a game of liquor pong! Since the cups aren't moving you don't have to worry about the pong balls not going in. The table isn't going anywhere because the company was smart enough to include rope to tie it down. 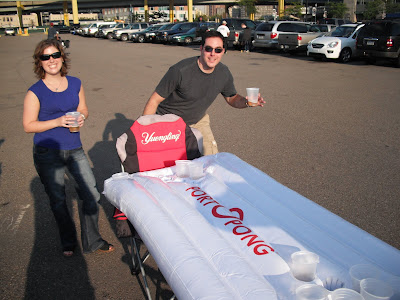 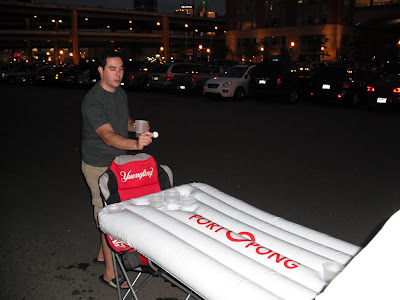 Seriously this is one of the coolest beer accessories and products I've ever had or used. We're trying to figure out other ways to use it and have some ideas in the works and we'll bring them to you as soon as they are field tested (aka as we get drunk). I won't lie ... we made quite a mess and got beer freakin everywhere. But when we got back to the house all we had to do was hose it off and it was clean. We had zero problems attracting chicks over to the tailgate while playing this either. Yeah ... Port-O-Pong is a chick magnet ... err ... raft? Whatever. 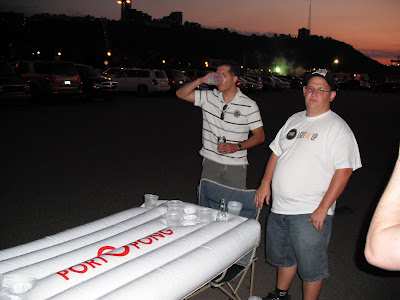 We were trying to come up with stories on how the guys at Port-O-Pong came up with this idea. Our best one? They were probably at a buddies house working on their tan while getting hammered and floating on a raft in the pool. "Dude ... you know what would kick ass?" "What man?" "If I could play beer pong right now!" "Yeah man ... let's go inside and play!" "No dude! I mean right now ... while floating on this raft! I don't even have to take off my orange floaties!"
Yeah ... that's exactly how it happened. Um ... okay .... probably not. But a huge thanks to the guys at Port-O-Pong and we'll look forward to drinking with their next invention! 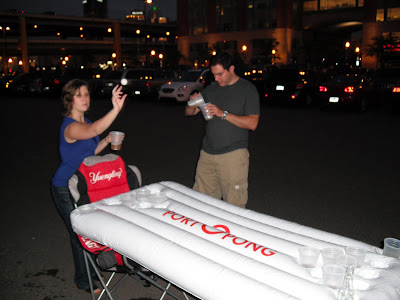 If you want to get your own table check them out at http://www.portopong.com/ 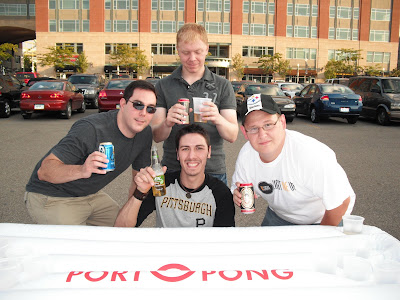 I really appreciate the blog and I think it’s great.
Beer Pong Tables

We're all familiar with "the thrill of victory and the agony of defeat". Now you can experience that thrill when you bet online. With training camp upon us, it's just a matter of time until you get the fever. Go ahead, try it. It's free.

Question of the Day

A Night At The Bar